Darwin’s Voyage on the HMS Beagle
After graduating in 1831 with a respectable degree in theology from Cambridge, Charles Darwin went on to pursue his life-long interest in the natural world.
Article Summary: Darwin was not the first to understand that organisms evolve, or change, over time. His crucial contribution was in identifying the mechanism of change, natural selection.
Charles Darwin & Evolutionary Theory 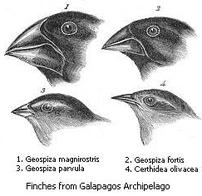 Darwin's illustrations of beak variation in finches of the Galápagos Islands, where 13 closely related species exist that differ in the shape of their beaks. The beak of each species is suited to its preferred food, suggesting that these beak shapes evolved by natural selection.
1

SPO VIRTUAL CLASSROOMS
Much to his father’s dismay, the 22-year old graduate joined a British Naval mapping expedition aboard the H.M.S. Beagle as an unpaid naturalist and companion for the aristocratic captain, Robert Fitzroy.
During this voyage, Darwin gained the knowledge that eventually led to his assertion that natural selection is the driving force of evolutionary change, and there were several key pieces of information that led him to this conclusion.

Page last updated: 11/2015
Continued ...
The last piece to Darwin's puzzle.
Go to PAGE 2 >
CLASS NOTES
from the free STEM
education site
Science Prof Online
Darwin’s Readings: Charles Lyell & Uniformitarianism
The HMS Beagle was to sail around the world on what would ultimately become a five year long voyage. During this long passage, Darwin read the early books of Charles Lyell and became convinced that Lyell’s theory of uniformitarianism provided the correct interpretation of the earth's geological history.
Lyell, an English lawyer and geologist, had carefully examined European geological deposits and concluded that geological transformation most commonly occurred through the accumulation of progressive changes over long periods of time rather than through sudden, catastrophic events.
Lyell documented the fact that the earth must be extremely old, and that throughout time, the planet has continually undergone processes that change and shape the land, including erosion, earthquakes, glacial movements, volcanoes, and even the decomposition of dead plants and animals.
The Galapagos Islands
Darwin’s readings and research on the voyage were critical factors that lead him to accept biological evolution, which was an idea that had already been proposed by others. But Darwin still wondered how exactly did evolution occur? What was the cause or driver of evolutionary change?
During the expedition, he spent five weeks in the Galápagos archipelago of the Eastern Pacific Ocean.
FREE BIOLOGY HOMEWORK ASSIGNMENTS
Classroom-tested Biology Homework Assignments
FREE from
ScienceProfOnline.com
Virtual Biology
Classroom
You have FREE access to a large collection of materials used in a college-level introductory biology course. The Virtual Biology Classroom provides a wide range of free educational resources including PowerPoint Lectures, Study Guides, Review Questions &  Practice Test Questions.

On these isolated islands Darwin began to comprehend the factors that cause plants and animals to evolve over time, but apparently did not clearly formulate his views on what was driving biological change until after the voyage ended in 1836. 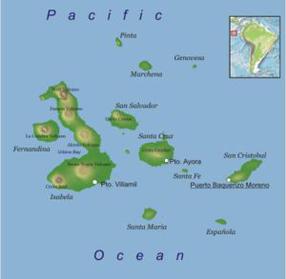