He saw beings as arising in one of three ways, from sexual reproduction, asexual reproduction or nonliving matter. According to Aristotle, it was readily observable that aphids arise from the dew on plants, fleas from putrid matter, and mice from dirty hay; and this belief remained unchallenged for more than two thousand years.
What was actually being observed was the appearance of visible organisms or populations of organisms which arose from microscopic precursors, not spontaneous generation. For example it only takes one bacterial cell to, in a matter of days, give rise to millions of daughter cells, or minute aphid eggs to quickly give rise to visible adult aphids.
Important Early Microbiologists
There were many involved in the triumph of Germ Theory, but here is a summary of some of the key players. Those italicized are covered in this article. To learn more about the unitalicized names below, see the article on Late Germ Theory.
Antonie van Leeuwenhoek (1670s)
During his life, Leeuwenhoek assembled more than 250 microscopes, some of which magnified objects 270 times.
Article Summary: Germ Theory is the concept that microorganisms can cause disease, and this theory is the foundation of modern medicine. Here is a summary of some key discoveries.
Early Germ Theory: Leeuwenhoek, Semmelweiss & Snow

SCIENCE VIDEOS
The refutation of spontaneous generation was essential in the development of Germ Theory; the understanding of infectious disease. Spontaneous generation, is the idea that, on a daily basis, living things can arise from non-living matter, a violation of cell theory.
Aristotle and Spontaneous Generation
Aristotle was one of the first to record his conclusions on the possible routes to life.

Ignaz Semmelweis and Puerperal Fever (1840s)
Semmelweis, and Austrian physician, noticed death rates were higher in maternity wards staffed by medical students than in those attended by midwives, and that death rates also went down in summer, when medical students on vacation. Many of these deaths were the result of puerperal (pyoor-peral) fever, a lethal condition in women occurring in the period following delivery.
Through magnification, he discovered presence of “micro” organisms--organisms so tiny that they were invisible to the naked eye. He called these tiny living things “animalcules,” and was the first to describe many microbes and microscopic structures, including bacteria, protozoans and human cells.

Replica of a Leeuwenhoek microscope, a small device held up to the eye.
His investigation of the connection revealed that medical students were coming directly from autopsy to maternity wards without washing their hands. When students were required to wash hands in solution of chlorine before entering maternity ward, and between patients, number of infections and deaths were dramatically reduced.
John Snow’s Investigation of Cholera (1854)
Although Snow, an anesthesiologist and pioneer of the science of epidemiology, had recently published a report speculating that cholera was spread by contaminated water, the paper did not receive meaningful attention and cholera rampaged through the industrial cities of Europe, killing tens of thousands. 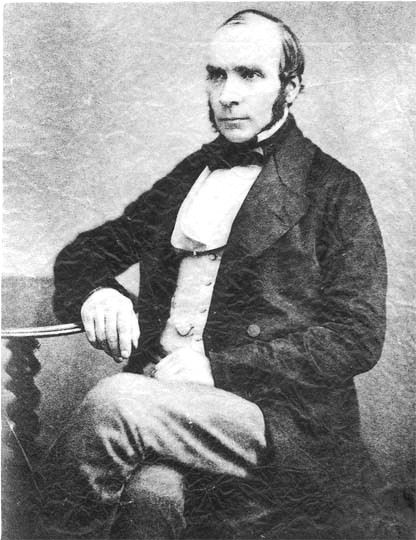 On the night of August 31st, 1854 a violent outbreak occurred in London, and within three days 127 people living in or around Broad Street died. By the 10th of September, the number of fatalities had reached 500.
Snow’s previous research had convinced him that cholera was spread by a poison passed from victim to victim through sewage-tainted water. When he mapped the occurrence of cholera cases in the area, he found that they centered around a specific public water supply, the Broad Street Pump.
Though they were reluctant to believe him, area administrators agreed to temporarily dismantle the pump, and when they did, the cholera outbreak dramatically ended.
Sources and Resources
Dr. John Snow 1813-1858 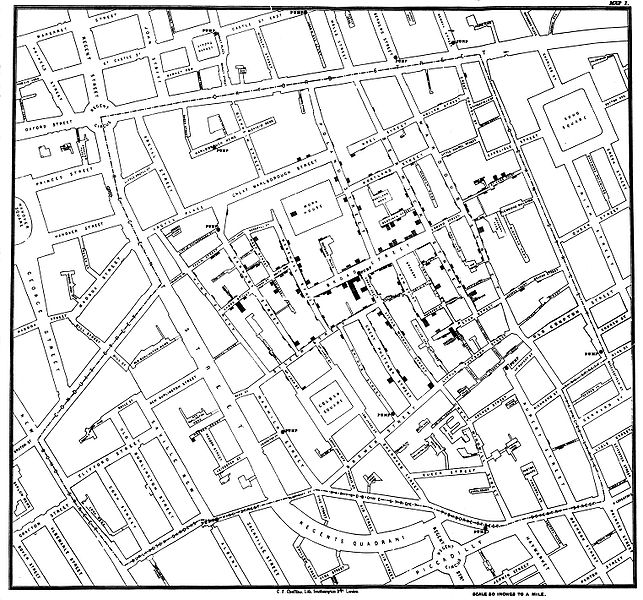 Map by John Snow showing the clusters of cholera cases in the London epidemic of 1854.