Every year American robins nest under the deck of our home. We watch nests succeed and fail, but have never documented development of the chicks. This spring, of 2015, we are photo-documenting two nests.
American Robin Chick Development - Betty 2015 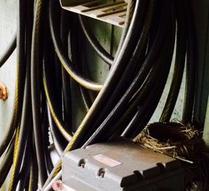 American robin Betty's sheltered nest, resting on electric meter, under backyard deck, next hoses and back garage door.
SPO VIRTUAL CLASSROOMS
Page last updated 7/2015
Left: Four American robin chicks begging for food. Above: Chicks sleeping.
Betty and Barney's Brood
Betty is a fierce parent, and continuously makes an alarm call until I leave the area of the nest. On May 16th, when her chicks were six days old, she began "dive bombing"--swooping down towards me, very close, but not making contact.
I originally thought Betty was a single parent, because I did not see another bird guarding the nest. But I have since seen a shy robin that hangs out in the area, but doesn't come around when I am there. So Betty probably has a Barney.
We began tracking this nest on the day the chicks hatched.
Day 1 - Hatching
5/10/2015
Now see
Wilma & Fred's Nest! 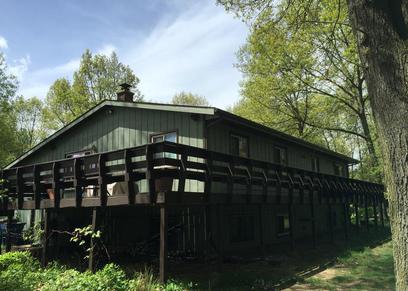 American robin female guarding her nest. We have named her "Betty". She is easily recognizable due to a notch in the feathers on her head. Betty has a shy mate, that we don't see as often. We've named him "Barney." 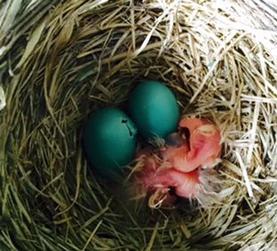 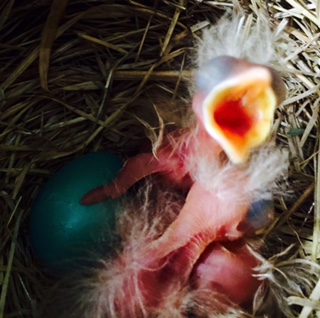 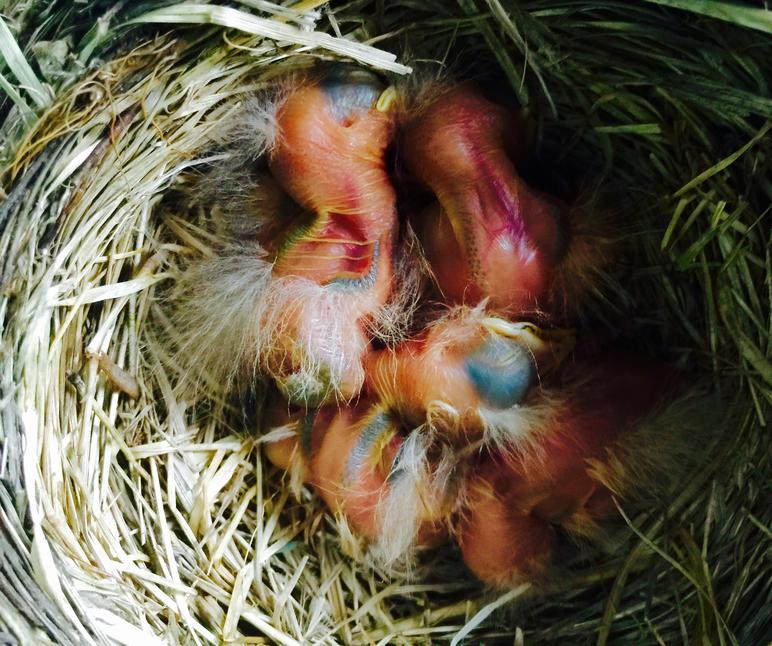 Above left: Robin nest with two hatchlings and two eggs. Note that the shell of the egg on the left breaking open. Above: Three hatchlings and one egg. See one nestling begging for food, pushing itself up with its stubby naked wings. Left: All four chicks have hatched, and are sleeping...something that baby birds do a lot of.
Day 3
5/12/2015 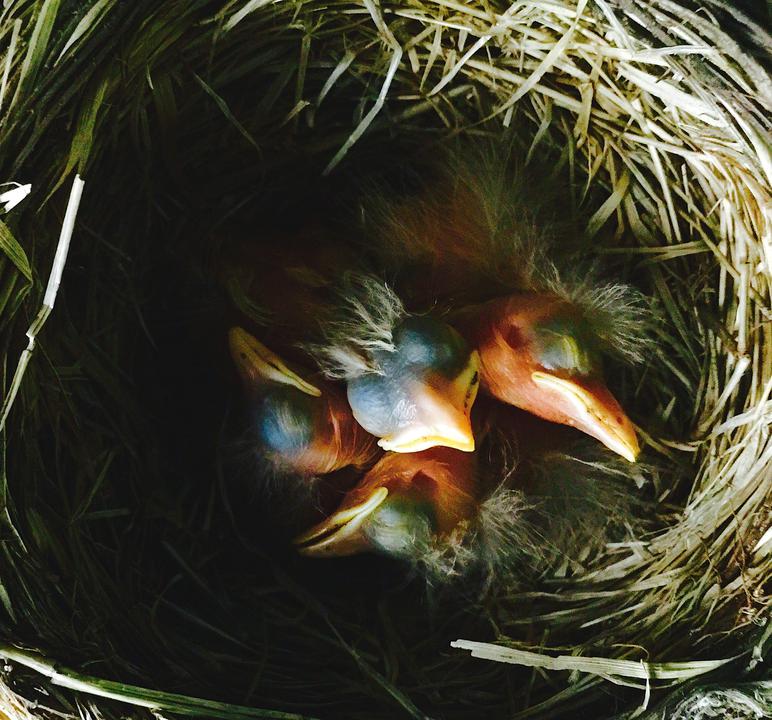 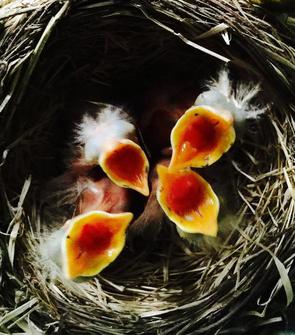 SPO is a FREE science education website. Donations are key in helping us provide this resource with fewer ads.
Please help!
(This donation link uses PayPal on a secure connection.)
Article Summary: Photo record documenting the development of a brood of American robins, nesting under the backyard deck of a southwest Michigan home. This page features one of Betty's 2015 broods.
We are careful not to disturb the nest or chicks, an do
​not spend much time at the nest. Just long enough to snap a photo. Check back frequently, and Like Us on Facebook to follow the chicks development!
We have many photos of the pair of robins that we are following. This page features Betty & Barney's nests. Click the links to learn about American robins and see photos of Wilma and Fred's broods!
Betty & Barney's 1st Nest
Under back portion of deck, facing east, 29 inches (73.6 cm) above the ground, built on top of the home's electric meter.
PAGE 2                                                 <  Back to Page 1

I do not recall past nests in this location. Although we may have discouraged the building of nests here previously, as it is a very busy location, next to the outdoor faucet and the back door to garage. The nest is tucked away, and pretty well hidden, but low to the ground.
Day 4
5/13/2015 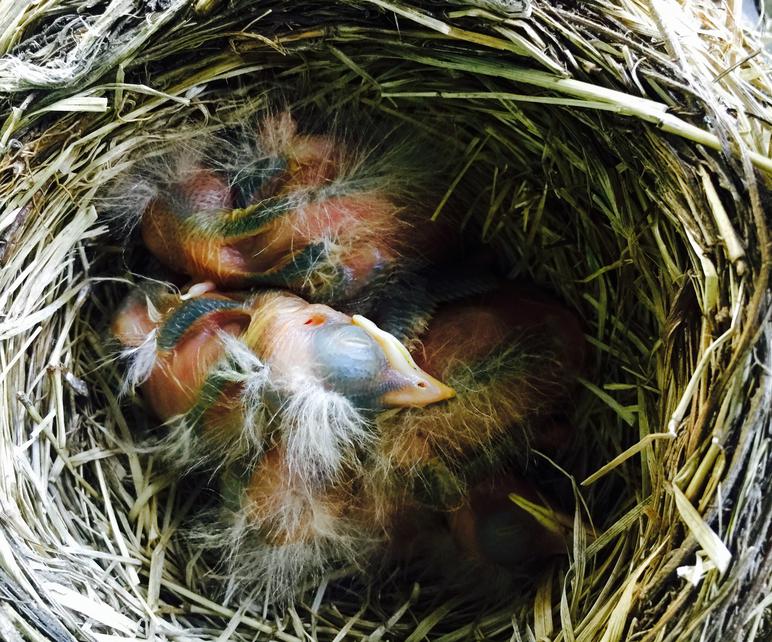 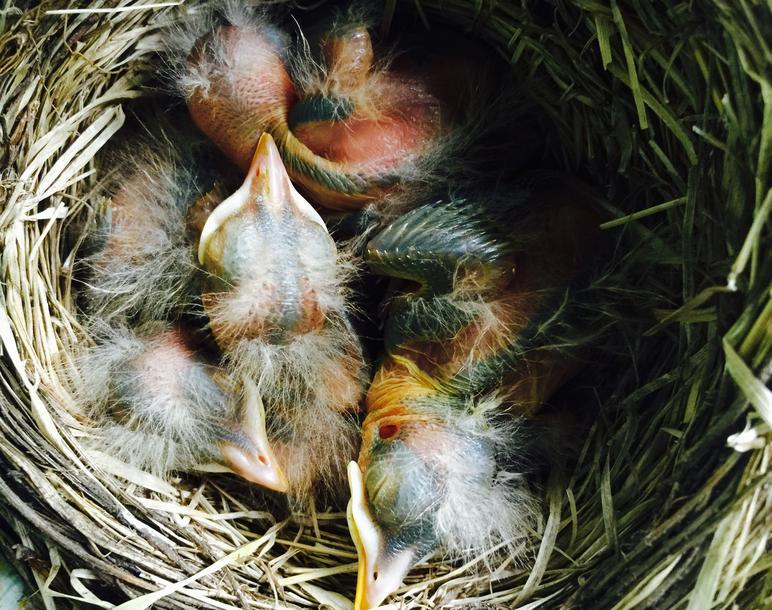 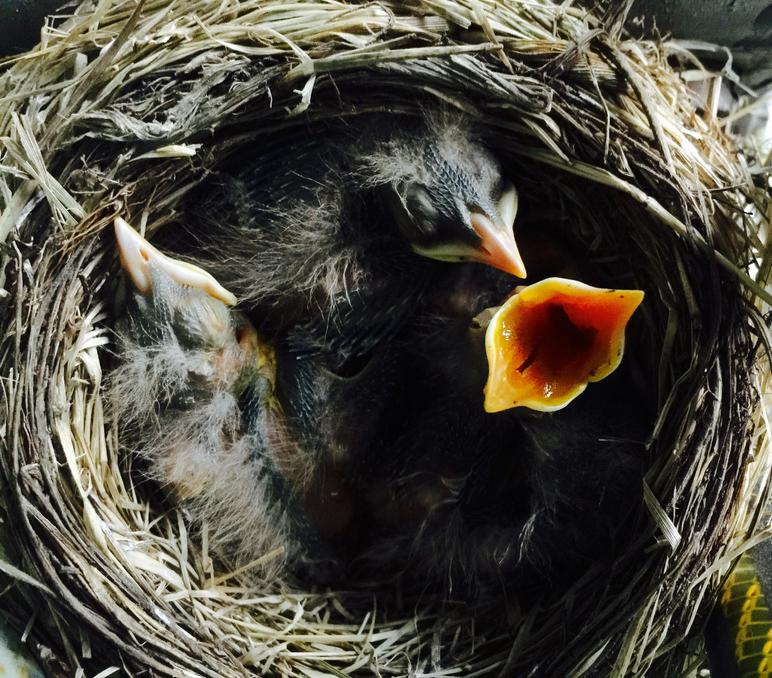 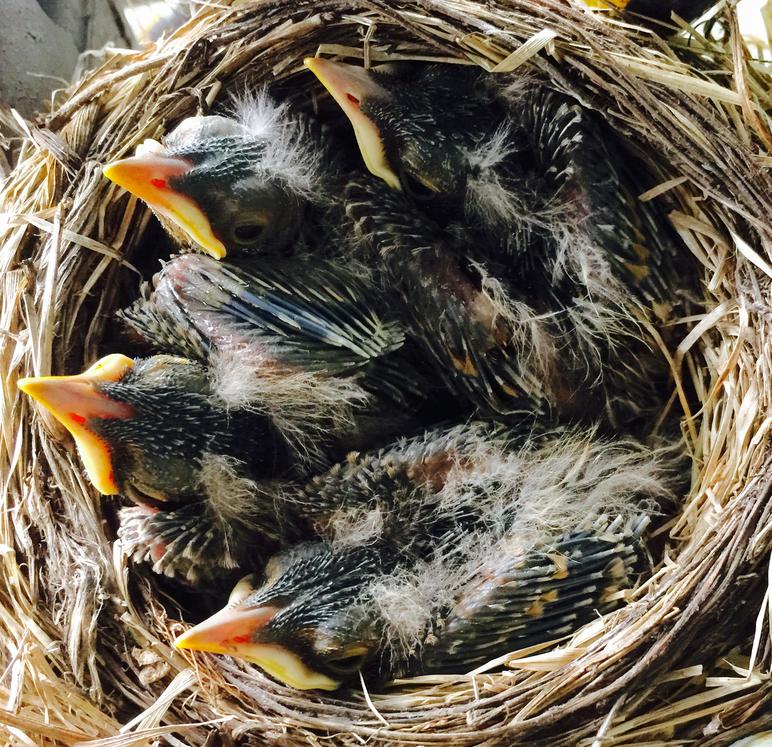 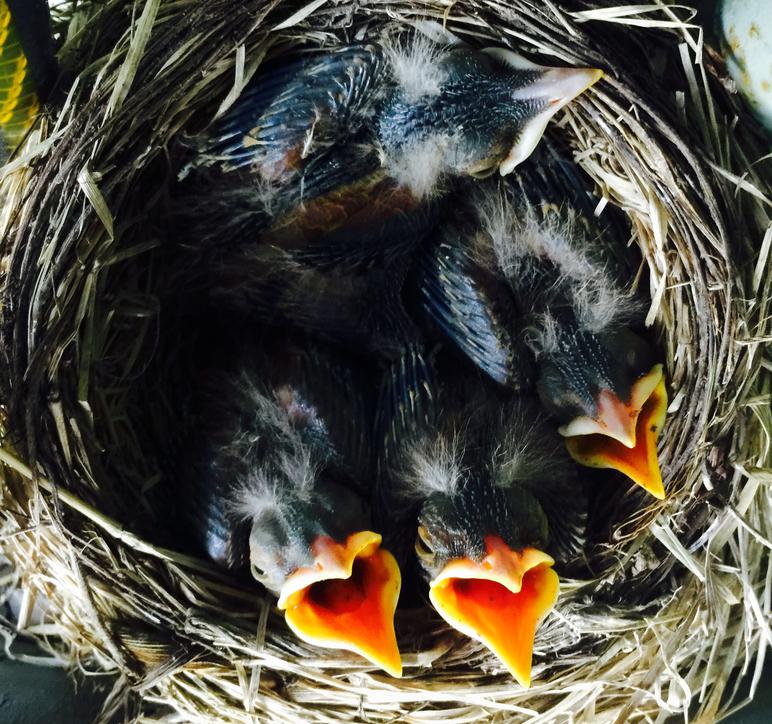 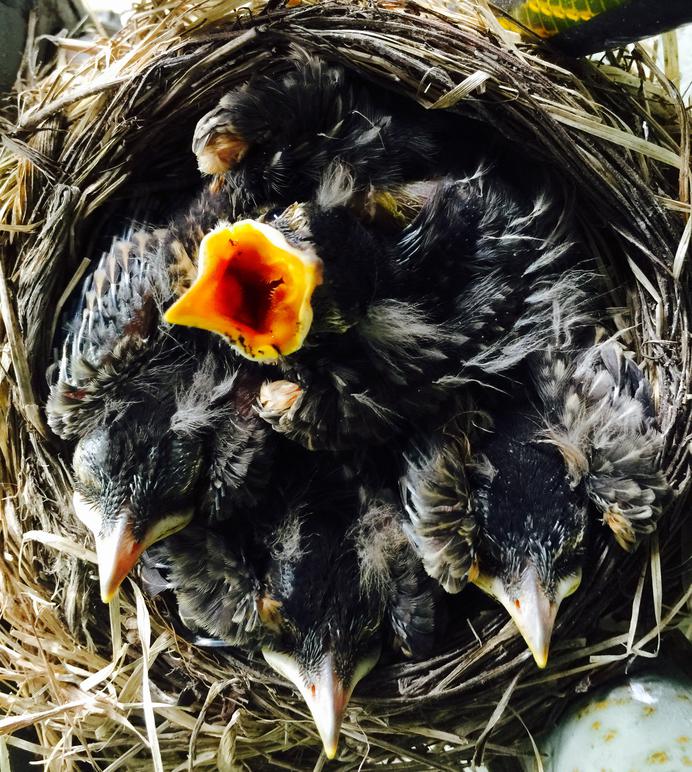 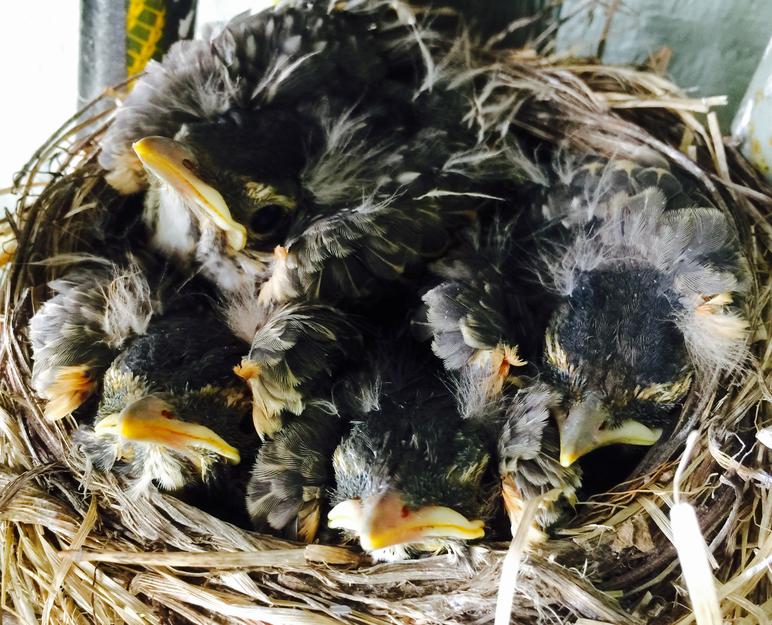 Day 11
5/20/2015
Don't they all
look like feathered versions of Grandpa
from The Munsters?
Monarch Butterfly Metamorphosis
Main Page
See our butterfly garden and the monarchs that complete part of their life cycle there. Learn how to attract Monarch Butterflies to your yard! 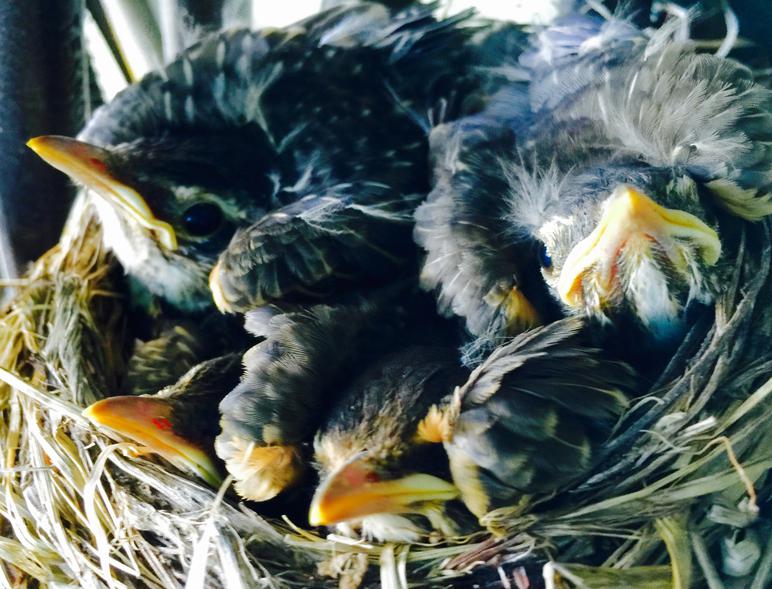 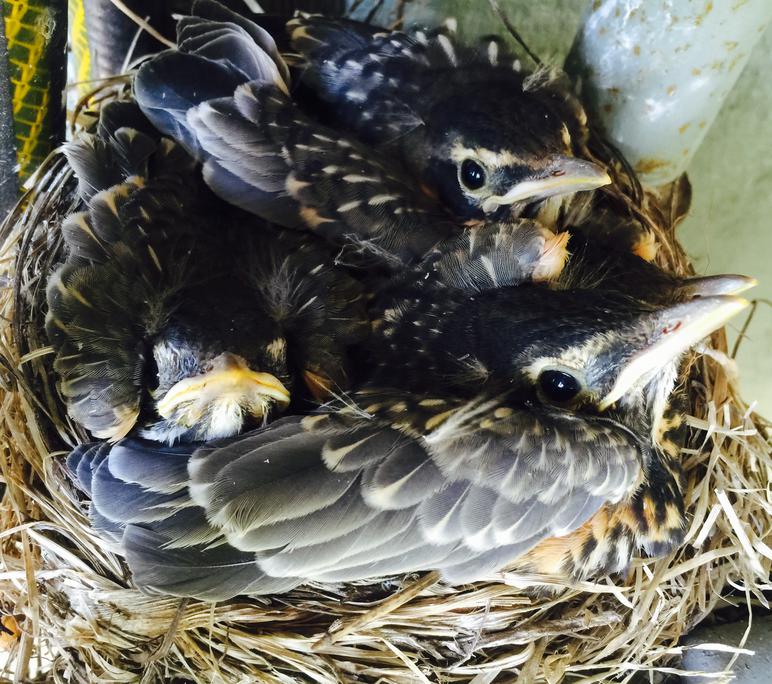 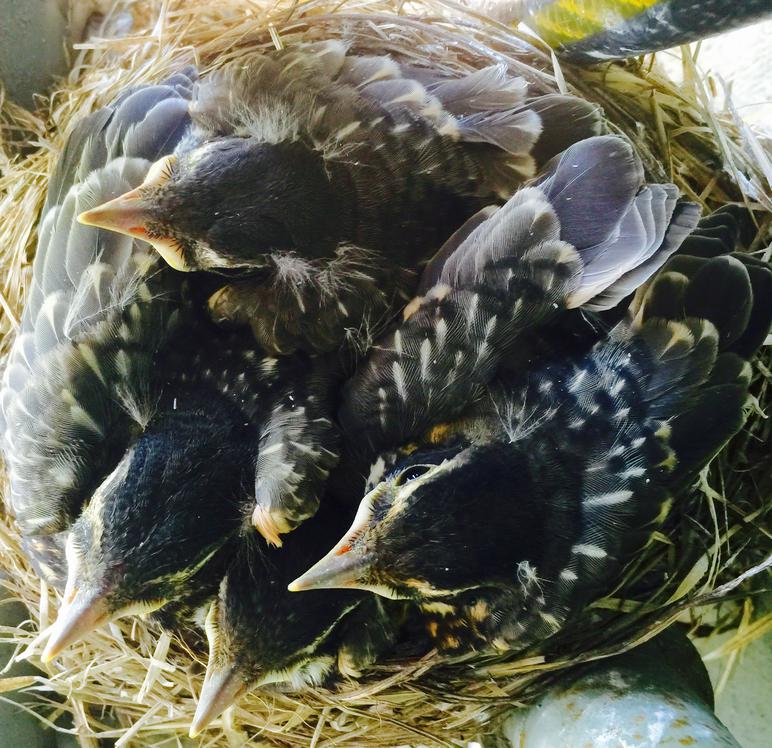 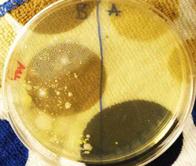 Shark Light & Easy
Steam Mop Experiment
See a microbiology experiment on how well this steam mop cleans floors.
Side view
Top view
Today some of the chicks started snapping their beak defensively when I approached, rather than begging for food. Ah, they grow up so fast! 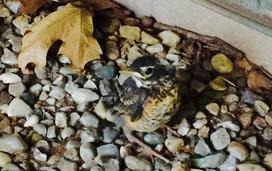 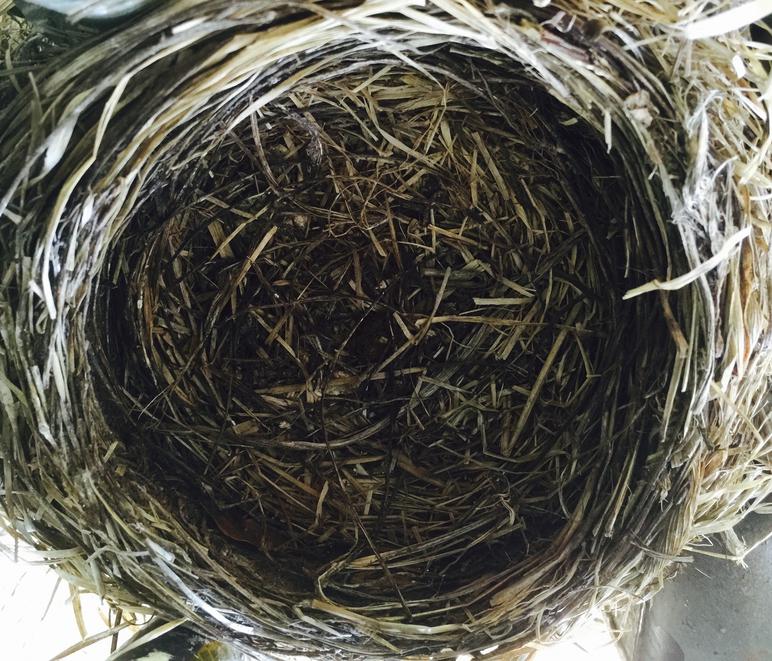 I only saw one, very
well-camouflaged,
fledgling near the nest.
A very tidy, empty nest.

Check out our new
Microscopic
POND LIFE
Main Page!
More Information on the American Robin
​Cornell Ornithology Lab recommends that, when monitoring a nest, you check it only every 3 - 4 days, to minimize disrupting the birds and avoid attracting predators. At SPO, we do check our nests more often, to get photos for science education. Visit the Cornell Ornithology Nest Watch website to learn how to observe nests safely. ​

SCIENCE VIDEOS
Betty & Barney's 2nd Nest
Betty built a second nest, rather than reusing her old nest. She first tried to build on top of the back deck security light, but since this is a high traffic summer area, and the nest was very messy, we nocked it down before she got very far. She build another nest for her second clutch 91" (231cm) above the ground in the thick grapevine covering the back of our deck. 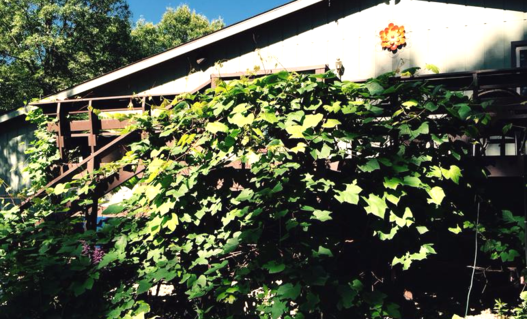 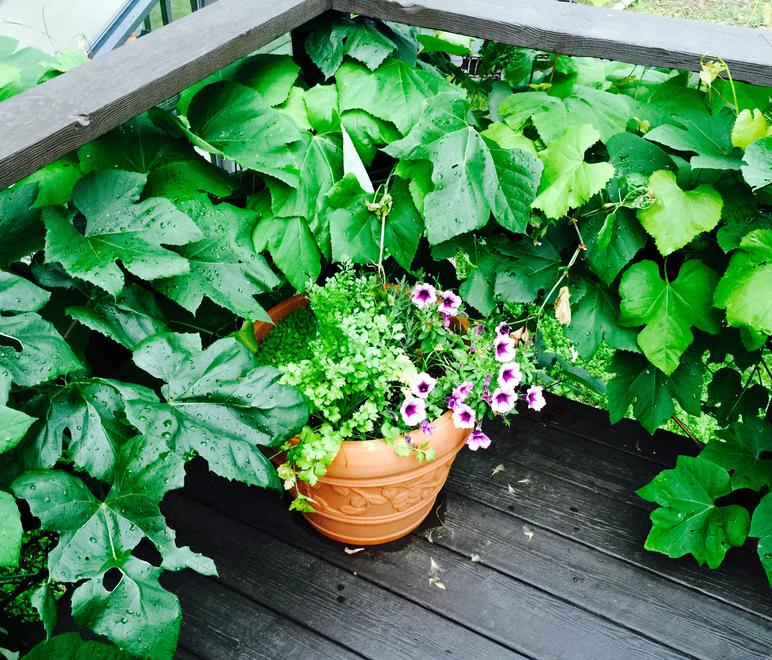 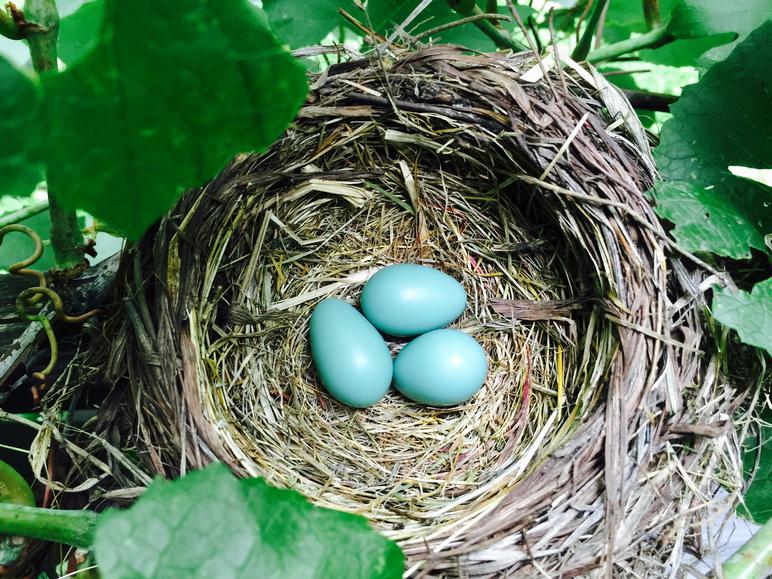 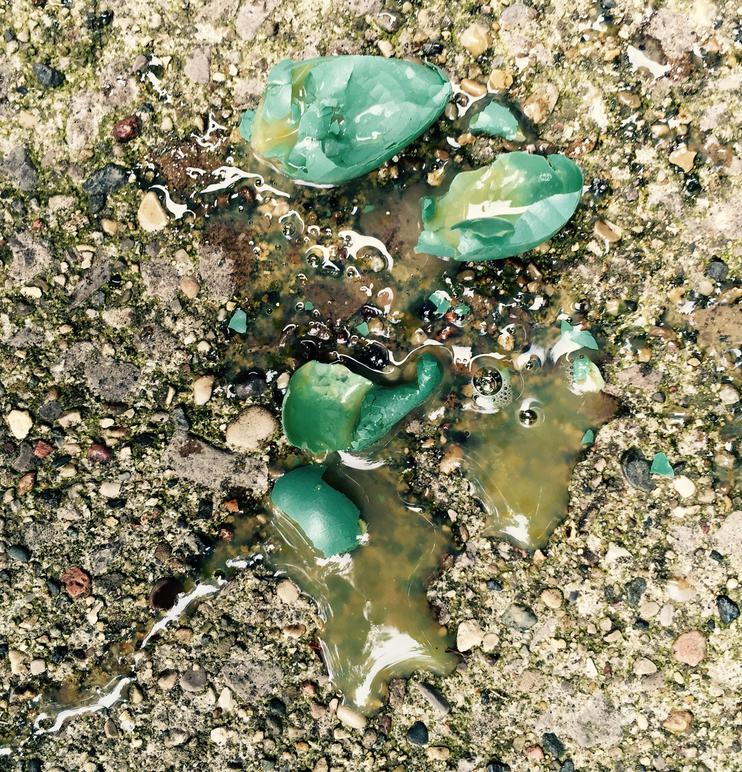 Betty laid three eggs in her second clutch finishing on June 26th She then brooded (sat on) the eggs for nearly a month. She abandoned the nest on July 22nd. (Robin eggs hatch in 2 weeks.) Didn't see Barney at all during this time, but he is a shy bird. 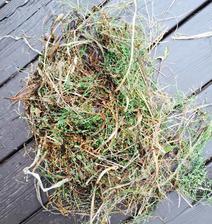 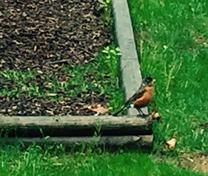