Cytoplasm of Prokaryotic Cells
What's Inside of a Prokaryote?
1

Unlike eukaryotes
(which have numerous membrane-bound organelles that create different compartments within the cell) prokaryotes
have only one membrane, the plasma membrane, which encloses the cytoplasm and all of its cellular contents.
Article Summary: The cytoplasm of prokaryotes is an aqueous gel that contains cytosol, ribosomes, inclusions and the cytoskeleton.
Cytoplasm of Prokaryotic Cells
Inclusions of Prokaryotic Cells
Inclusions are reserves of nutrients and other chemicals, substances which the cells has an excess of and stores in deposits throughout the cytoplasm. A cell may have inclusions composed of lipids, carbohydrates or compounds containing various elements. Some inclusions even store gasses which function to control buoyancy in aquatic bacteria. Certain types of bacteria form unique inclusions that can be useful in aiding with bacterial identification.
Cytoskeleton of Prokaryotes
The cytoskeleton, a network of protein fibers within the cell, was thought, until recently, to be present only in eukaryotic cells. It is now known that rod shaped bacteria, and bacteria-like prokaryotes called Archaea, also have a cytoskeleton functionally similar to that of eukaryotes. The cytoskeleton plays a role in cell division and maintaining cell shape and structure. Cocci shaped (round) bacteria are not believed to possess a cytoskeleton.
Ribosomes of Prokaryotic Cells
All biological cells, eukaryotic and prokaryotic, have ribosomes—non-membranous organelles that are the sites of protein synthesis (translation) within the cell. Prokaryotic ribosomes are slightly smaller than those present in eukaryotic cells, and are found numbering in the thousands, floating freely throughout the cytoplasm and giving it a grainy appearance. 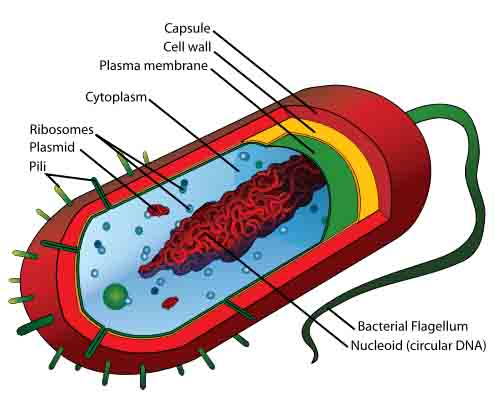 If a eukaryotic cell can be described as being analogous to a house with many rooms, a prokaryotic cell would be like a studio apartment - just one room used for all activities. The cytoplasm is essentially where nearly all the action happens within a prokaryote - metabolic reactions, and the genetic tasks of replication, transcription, and translation. The following are considered part of the cytoplasm of prokaryotic cells.
Cytosol of Prokaryotic Cytoplasm
Cytosol is the semi-liquid portion of the cellular cytoplasm, mainly consisting of water, but also containing inorganic and organic molecules, including the cells genetic material—DNA, which is called the nucleoid in prokaryotic cells. Most of the chemical reactions that run the cell take place within this gelatinous cytosol.