As a college microbiology instructor, I teach a lab about microbial control, how to kill microbes. There are various control methods available to students: physical (heat and UV radiation), antibiotics and chemical agents.
Article Summary: Many steam mops use both physical (heat) and chemical (cleaner) means to sanitize, and claim nearly 100% effectiveness. But how clean do steam mops really get floors?
Does Shark PRO Steam & Spray™ Mop Kill Bacteria?

SPO VIRTUAL CLASSROOMS
The students choose which they would like to use and then design and conduct an experiment.
One of my students tested how well the Shark® Light and Easy™ steam mop
sanitized his kitchen floor and got very impressive results, so impressive that I bought my first steam mop that same day.
In contrast to the Shark Light & Easy, which uses only steam to clean and sanitize floors, I chose a model of steam mop that employs both steam (heat) and spray cleanser (chemicals), the Shark® PRO Steam and Spray™ Mop. Steam mops typically generate steam at more than 200 degrees Fahrenheit, a temperature that will kill most microbes.
With the Shark Steam & Spray mop, steam is only generated when the mop is plugged in. The cleanser sprayer is battery operated. The Shark Steam Energized™ cleanser comes with the mop, costs approximately $7 per 20 fl. oz. bottle separately, and makes no claims regarding sanitizing. This cleanser was used for all of our Shark® PRO Steam and Spray™ Mop experiments. However, as it is expensive, when cleaning my floors I typically refill the bottle with my own cleaning solution (although doing so is, not surprisingly, against the manufacturer's recommendation).
Changes to Original Experimental Design
There were some elements of the original experimental design that I wanted to change, and further tests I wanted to perform. In the original Shark Light and Easy steam mop experiment, one kitchen floor tile was steam cleaned for one minute. That is not a realistic amount of time to clean a floor tile. Few people will spend an entire minute cleaning each small section of floor. So the following experiment was designed with a shorter cleaning time and with three comparisons: steam only, cleanser only, and a combination of steam and cleanser.

ANOTHER HOME MICROBIOLOGY EXPERIMENT FROM SPO
Does the automatic dishwasher sanitize dishes? Yes!
TSY agar with sample from dirty dishes on top (note bacterial colonies that grew), and sample from cleaned dishes on bottom.
Experiment 1a, 1b & 1c: Shark PRO Steam & Spray Mop
Experiment #1 Methods
The steam mop was used to clean three adjacent dirty areas of kitchen floor in front of the stove. Each area cleaned was as wide as the mop head in a vertical 2 foot swipe. Cleaning was accomplished using five back-and-forth “swipes” (a total of 10 passes), each swipe lasting 1 second. When the mop is plugged in, steam is released every time the mop is pushed forward.
a.

In strip 1a, only steam was used, one burst of steam each of the 5
times the mop was pushed forward.
b.

In strip 1b, the steam was turned off and the cleanser
sprayed each of the 5 times the mop moved forward.
c.

In strip 1c, with the steam on, the cleaner was sprayed each
of the 5 times the mop moved forward.
Experimental Results
For all three sections of floor, cleaning dramatically reduced the amount of bacteria present, however, there was not a dramatic difference between the three sections. In other words, steam only, cleanser only and combined steam and cleanser worked equally well. See photos and summary of results below. 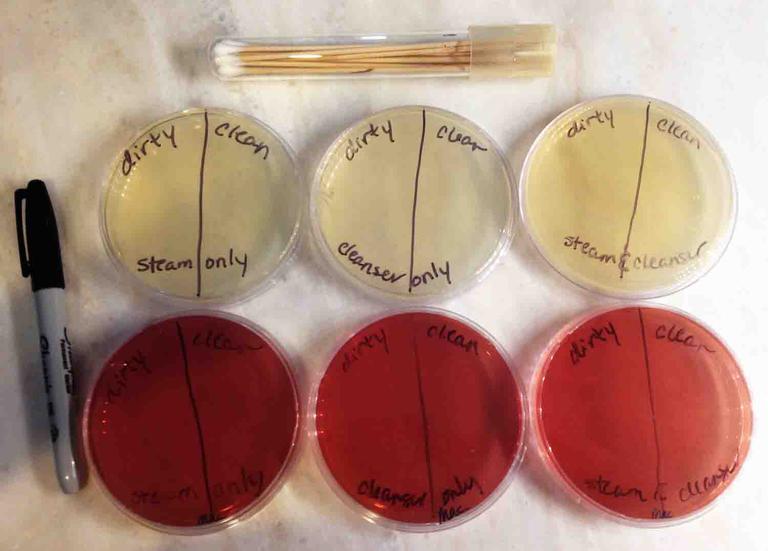 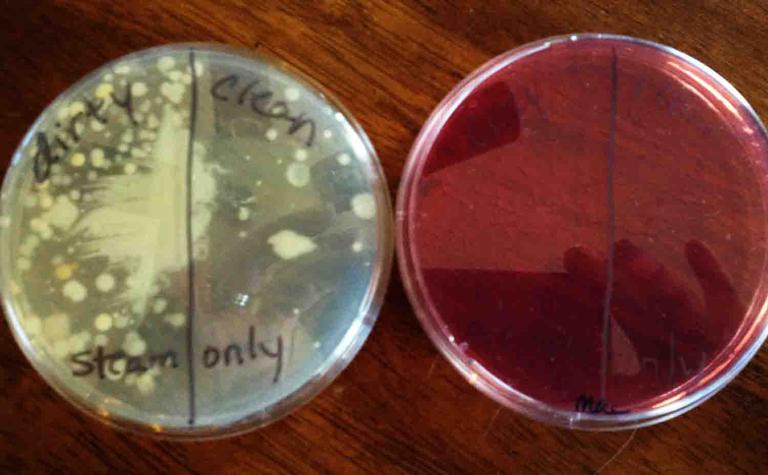 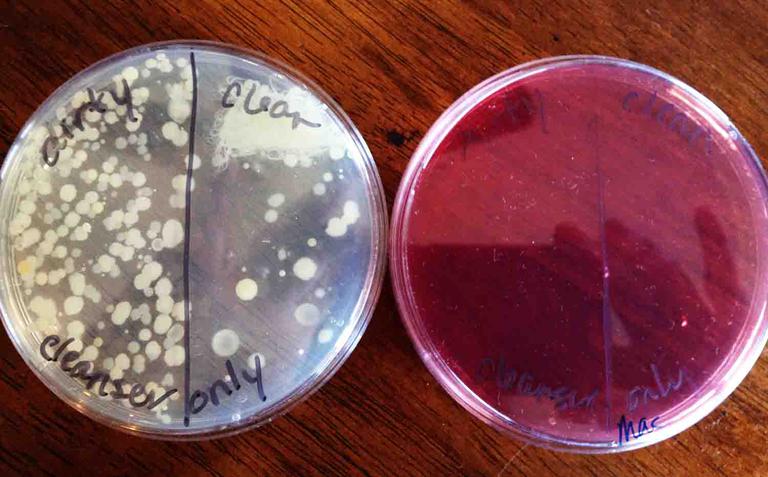 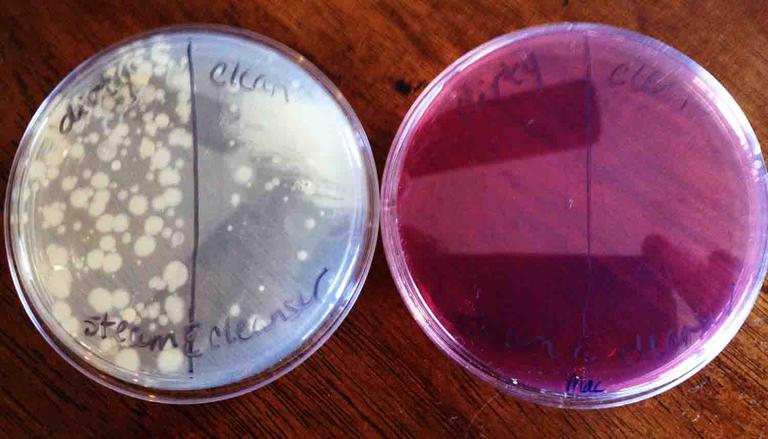 Shark PRO Steam & Spray Sanitation Experiment Results
"Before cleaning" floor samples plated on left side of plates, "after cleaning" samples plated on right side of plates. TSY agar on left, MacConkey's agar on right, in each photo.
1
2
3
For all three experimental conditions, cleaning dramatically reduced the amount of bacteria on the floor, regardless of whether steam alone (1), cleanser alone (2) or a combination of steam and cleanser (3) were used. There were no bacterial colonies growing on any of the MacConkey's agar plates, neither before nor after cleaning, indicating the absence of Gram-negative coliform bacteria.
Experimental Conclusion
Although cleaning the floor did reduce the number of bacteria present, none of the experimental conditions (steam alone, cleanser, alone or a combination of steam and cleanser) resulted in a level of sanitation that I'd like to see after cleaning my floors. There was still too much bacteria present.
However, the the mopping method I used in this experiment did not feel like what I would normally use when cleaning the floor. There were too few strokes over each area of the floor (a total of 10 for each section) and too much cleanser left on the floor to dry in the sections that used cleanser. It took more than a half hour for the floor to dry after mopping.
Therefore, I am going to repeat this experiment with a new mopping method designed to more closely resemble how I would actually clean my floors. See "Does the Shark® PRO Steam & Spray™ Mop Kill Bacteria? Experiments #2 & #3" for details, and a recommendation on the best method to use in sanitizing your floors.
Additional Microbial Control Resources

Microbiology Reading
Recommendations
- Spillover by Quammen
- Rabid by Wasik & Murphy
- The Viral Storm by Wolfe
- The Ghost Map by Johnson
​- Missing Microbes by Blaser
- The Great Mortality by Kelly
-The Great Influenza by Berry
- Pandemics: What Everyone Needs to Know by Doherty
- Deadly Outbreaks by Levitt
- Microbe Hunters by De Kruif
- Wickett's Remedy by Goldberg
- The Dress Lodger by Holman

​Page last updated 1/2016
This experiment has been revised and repeated.
See > Steam Mop Experiments 2 & 3
Safety Measures When Working With Live Bacteria
Please read this section carefully before carrying out the experiment outlined above. Although these plates will be growing bacteria present on hands, once the bacteria begin growing on the agar plates, they will be present in much higher numbers than a person would normally encounter. Therefore, there are some important safety precautions to keep in mind:
ATTENTION!: Please see the section on Safety Measures for Working with Live Bacteria before attempting this experiment yourself!
SPO is a FREE science education website. Donations are key in helping us provide this resource with fewer ads.
Please help!
(This donation link uses PayPal on a secure connection.) 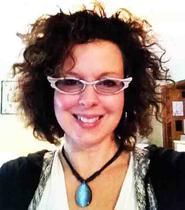