is cut in half, a catabolic reaction that releases energy, resulting in two ATP, two molecules of the electron carrier NADH, and two molecules of pyruvic acid.
Glysolysis = glucose and NAD+ -----> 2 ATP and 2 NADH and 2 pyruvic acid
What’s An Electron Carrier?
Electron carriers are like rechargeable batteries. When hydrogen and its electron are added to NAD+, it becomes NADH, and is considered to be “reduced”. As NADH, the electron carrier is charged up, due to the addition hydrogen’s electron. NADH packs potential energy that can be used at a future time and place.
Why Is Fermentation More Than Glycolysis?
If fermentation consisted only of glycolysis, NADH molecules would accumulate without being used…like a huge stockpile of rechargeable batteries. So in addition to glycolysis, fermentation also involves the oxidation of NADH, removing the hydrogen and electron to regenerate NAD+ (the discharged rechargeable battery).
The oxidation of NADH is accomplished by transforming pyruvic acid into a final waste product - either ethanol (alcohol) and carbon dioxide (CO2) or a type of acid, depending on the organism doing the fermenting.
Fermentation = glycolysis and oxidation of NADH and generation of waste products
When Do Cells Use Fermentation?
In contrast to fermentation, cellular respiration is a form of metabolism in which four different subpathways are utilized to very efficiently extract a large amount of energy from food. These pathways are:
Through cellular respiration, living things can convert food energy (usually in the form of the sugar glucose) into a large number of ATP (adenosine tri-phosphate) molecules, typically 36 to 38, and this ATP energy can be used for cellular work.
Most of the ATP energy produced in cellular respiration occurs within the electron transport chain (ETC), the last step of respiration. During electron transport, which takes place in the plasma membrane or mitochondrial membrane (depending on whether the organisms is a eukaryote or prokaryote), electrons are passed from one membrane-embedded protein to the next, a process that ultimately results in the generation of ATP.
The electrons passed down the ETC must eventually be disposed of by a final electron acceptor, often oxygen, at the end of the electron transport chain. People breathe in oxygen just for this purpose—as a final electron acceptor to the ETC, enabling the conversion of food energy to cellular energy. Those microbes that are aerobic (oxygen requiring) or facultatively anaerobic (can survive both in the presence or absence of oxygen) also use oxygen for the same purpose.
Sometimes organisms cannot complete electron transport, due to lack of oxygen, inability to use oxygen, or, in the case of anaerobic cellular respiration, lack of any other type of electron acceptors. In these situations, they can extract energy from food using fermentation.
Commercial Use of Fermentation Waste Products
Very little energy is extracted from food when it is broken down through fermentation - only two ATP - so a great deal of energy remains in the waste products, many of which are commercially valuable. When yeast and some types of bacteria perform fermentation, the end result is alcohol, such as the alcohol in beer and wine.
Other types of bacteria create acids during fermentation, such as the propionic acid that gives Swiss cheese its unique flavor. Lactic acid is found in yogurt, cheddar cheese and soy sauce, and acetic acid is what gives vinegar its biting flavor.
​Sources and Helpful Fermentation Links
Article Summary: Fermentation is a type of inefficient metabolism that allows two ATP energy to be extracted from food, and can result in commercially useful waste products.
What Is Fermentation?
Virtual Microbiology
Classroom
You have FREE access to a large collection of materials used in a college-level introductory microbiology course. The Virtual Microbiology Classroom provides a wide range of FREE educational resources including PowerPoint Lectures, Study Guides, Review & Practice Test Questions as well as Science Image and Video Libraries. 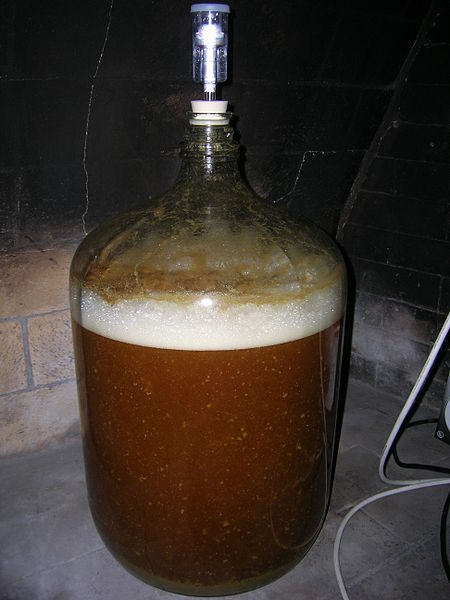 Home Brew: Yeast are fermenting the sugars available to them and generating the waste products of alcohol and CO2 (the bubbles at the surface of the liquid).

​Page last updated: 4/2015
SPO VIRTUAL CLASSROOMS
SPO is a FREE science education website. Donations are key in helping us provide this resource with fewer ads.
Please help!
(This donation link uses PayPal on a secure connection.)
Fermentation is an alternate metabolic pathway that allows glucose to be partially metabolized when there is no final electron acceptor available to complete the electron transport chain. Fermentation is the first stage of cellular respiration, glycolysis, plus reduction of the electron carrier NAD+.
The term glycolysis describes exactly what is occurring during this metabolic step—the lysis, or breaking down, of the sugar glucose. During glycolysis, the glucose molecule
Virtual Cell Biology
Classroom
You have FREE access to a large collection of materials used in a college-level introductory Cell Biology Course. The Virtual Cell Biology Classroom provides a wide range of FREE educational resources including Power Point Lectures, Study Guides, Review Questions and Practice Test Questions.