SPO VIRTUAL CLASSROOMS
2. During which phase of meiosis does the nuclear membrane reform around chromosomes?
a. interphase     b. prophase I     c. metaphase II
d. anaphase I     e. telophase II
​3. Homologous chromosomes move towards opposite poles of a dividing cell during...
a. mitosis
b. meiosis I
c. meiosis II
d. fertilization
e. binary fission
4. Meiosis II is similar to mitosis in that...
a. homologous chromosomes synapse
b. DNA replicates before the division
c. the daughter cells are diploid
d. sister chromatids separate during anaphase
e. the chromosome number is reduced
5. Metaphase of meiosis I and meiosis II differ in that...
a. chromosomes line up at the equator
b. homologues line up in meiosis I & duplicated chromosomes line up in meiosis II
c. sister chromatids line up in meiosis I and chromosomes line up in meiosis II
d. there are the same number of chromosomes
1. During which phase of the meiotic cell cycle does DNA replication
occur?
a. interphase
b. prophase
c. metaphase
d. anaphase
e. telophase
​The following questions are designed to help students better understand meiosis. All questions are based on material that can be found on the Cell Cycle: Meiosis Lecture Main Page.
"Hey there good lookin'!" Human sperm meets egg; male and female gametes that result from meiotic
cell division. 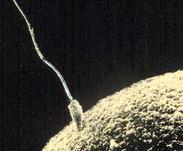 6. Asexually reproducing organisms produce offspring that are genetically identical to each other and to the parents. What type of cell division are the offspring a product of?
a. mitosis  b. meiosis  c. binary fission  d. fertilization
7. At which stage of meiosis do chromatids separate and become daughter chromosomes?
a. metaphase I
b. anaphase I
c. metaphase II
d. anaphase II
e. telophase II
8. A human cell containing 44 autosomes and two X chromosomes is...
a. a somatic cell of a male
b. a zygote
c. a somatic cell of a female
d. a sperm cell
e. an ovum
9. A _____________ is the complete set of chromosomes of an organism, arranged and displayed in pairs and ordered by size. (Select the BEST answer.)
a. genome       b. karyotype       c. nucleus
d. heredity        e. gene
10. Which 2 cells would be more genetically similar to each other?
a. two gametes produced by the same person
b. two somatic cells produced by the same person
c. two eggs produced by the same woman
d. two sperm produced by the same man