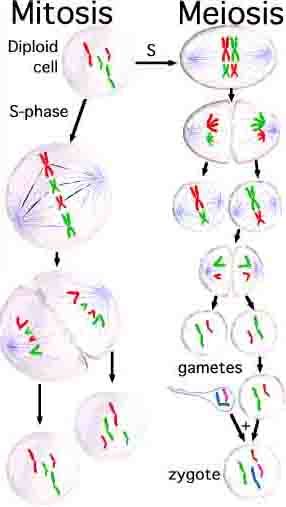 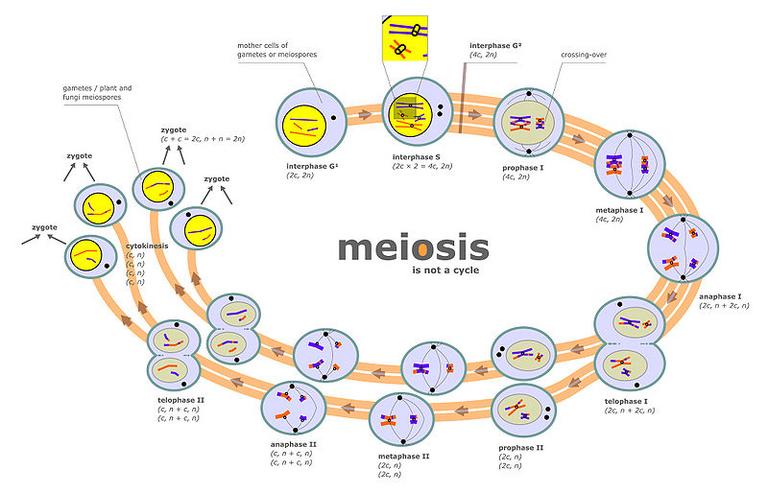 Page last updated: 3/2016
What is Meiosis?
Meiosis is the type of cell division that produces gametes, sperm or eggs, in sexually reproducing organisms. Meiosis reduces the number of chromosome by half, so that when a sperm fertilizes an egg, the resulting zygote has a full set of chromosomes.
Ploidy: Diploid & Haploid
Most of the cells in your body are somatic cells that have a diploid (2n) chromosome number, for humans that's a total of 46 chromosomes.
During meiosis there are two cell divisions of a diploid (2n) germ cell, resulting in four haploid (n) gametes. 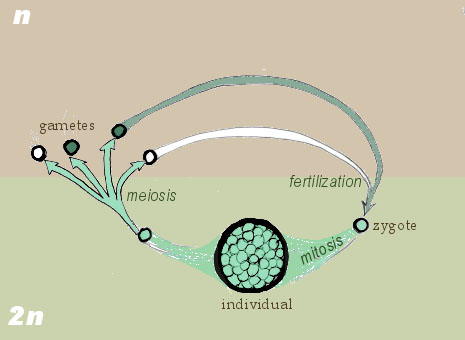 Meiosis I & II
As is the case in mitosis, in meiosis the cell duplicates its chromosome number prior to beginning cellular division (a process called replication). Then nuclear division, the sorting out of the genetic material, begins and unfolds over the course of 2 cellular divisions (meiosis I and meiosis II), resulting in 4 gametes.
Meiosis I
During meiosis I, pairs of chromosomes buddy up at the cell’s equator and then each moves to opposite ends of the cell. What started with one cell, now consists of two cells that each have a 23 duplicated chromosomes.
Meiosis I results in two cells that now have half the number of chromosomes, but those chromosomes are still duplicated. The role of meiosis II is to separate the duplicated chromosomes, resulting in four sex cells (gametes) with half the number of chromosomes (unduplicated) as the parent cell.
Since meiosis produces haploid gametes, you received a set of 23 chromosomes from your mother’s egg and a matching set of 23 from your father's sperm.
WHICH GENETIC TRAITS DO YOU HAVE?
Ten Genetic Traits of Simple Inheritance
FREE printable worksheet on simple inheritance
Meiosis II
Meiosis II unfolds much like mitosis does, but without the chromosomes replicating before nuclear division. Each duplicated chromosome left over from meiosis I lines up at the two cells' equators and these sister chromatids (as the duplicates are called) separate and move to opposite poles. Meiosis II ultimately results in 4 cells that, in humans, each have 23 (1n) chromosomes. 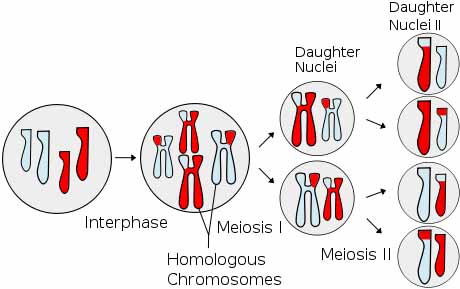